There are two main types of tumblers—the rotary and the vibratory. The first tumblers were of the rotary type, where a barrel revolves as it rides on two parallel revolving shafts. The vibratory type sits and shakes, causing the load to move within the barrel but without the harsher action of the rotary. Both types require a series of abrasives starting with coarse and working up to a fine polish.

Rotary tumblers are the most familiar type, and range in barrel capacities from around 3 lbs. to commercial sizes that will process hundreds of pounds of material. The smaller units (2 - 4 lbs. capacity) are popular for  beginners, but the less expensive kinds have more maintenance problems. A well built rotary tumbler can last for years, however, even decades, if given care. Lortone tumblers are classed as a better built tumbler.

Rotary (barrel) tumblers are generally easy to load, require a minimum of attention, and produce satisfactory results on most stones and metals. Their main tumbling action abrades away any sharp edges and points, leaving finished stones with rounded surfaces and contours. Rotary tumblers are not suitable for material that is pre-formed and desired to retain it’s shape.

Rotary tumblers generally take more time to finish a load of stones, from four to six weeks or more, depending on material and abrasives used. They also use more grit per load, but generally need fewer steps in the tumbling process, and less attention the rest of the time.

Vibratory tumblers have either mechanical or electronic drives. Mechanical units use motors for power, while the Mini Sonic and Vibra Sonic tumblers use magnetic energy. They have no moving parts such as shafts, belts or pulleys, and are exceptionally long lived.

The action in vibratory tumblers is more gentle than that found in rotary tumblers. The barrel in a vibratory tumbler remains stationary even as it vibrates, producing a continuous movement of material and grit within the barrel.

Vibratory tumblers are generally faster in polishing a given load of material than a rotary tumbler, but actual time can vary from one day for a final polish on a preform to several weeks on hard-to-polish stones when starting from scratch.

Follow these links for tips and tricks and general usage instructions:

Tumbling Rocks is a Vibratory Tumbler

Deburring in a Vibratory Tumbler 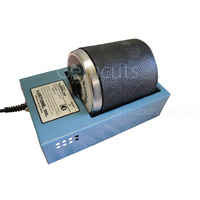 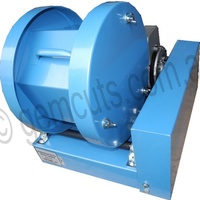