Pietersite was discovered by Sid Pieters in Namibia- South Africa- in 1962 and the find was first published in 1964. It was only discovered in another location- Henan Province, China- in 1993. These are the only two known source locations to this day.

Pietersite belongs to a branch of the tiger's eye family. Tiger's eye begins as the mineral crocidolite, but during the formation quartz replaces the crocidolite and takes on the shape of the fibrous mineral. What sets pietersite apart from its tiger's eye relatives is that, as this formation takes place, this crocidolite was broken apart, swirled in different directions and reformed before being cemented by quartz. This is what causes its signature streaks and colours in every direction, while often still displaying good chatoyancy.

Pietersite can include blue, rusty reds, gold and brown colours. Typically Namibian pietersite is dark in colour, which makes other colours present even more pronouned. In Chinese pietersite the main colours are yellow, red or blue- often including shades of gold, red, deep golden brown and a range of blues.

Pietersite has a hardness of 6.5 to 7 on Mohs hardness scale. 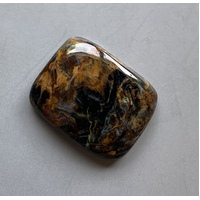 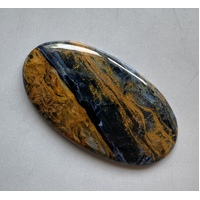 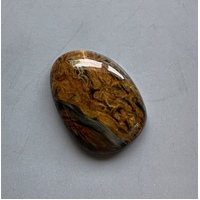